In today's Now Press Play, we took on the role of a Viking child who took a journey across the Northern Sea in search for a better life in England. We were shocked to find out that our fellow Vikings had plans to raid and invade.

We learned how to repeat code using the 'loop' and 'copy and paste' functions on the Sphero Edu app. We programed Sphero to perform a dance routine that was repeated in preparation for a dance party.

Here is a sample of our Anglo-Saxons and Vikings home learning projects.

We learned how to use the draw function on the Sphero Edu app. We enjoyed leaving secret messages for our partner.

We have been learning to show multiplication and division in a variety of different ways!

In today's computing lesson, we learned how to use the Sphero app and make Sphero move. We enjoyed coding our robots to move around obstacles.

In English, we have began studying 'Beowulf', an epic poem from Anglo-Saxon times. Here, we turned our partners into heroes that would be brave enough to fight Grendel the monster. We used the superlative form of adjective to describe our hero.

Today, KS1 and KS2 held a Black History Assembly. Each class completed study of an inspirational person from the local area.

We enjoyed putting all of this half term's learning in art into practice. We took inspiration from Caravaggio and Vermeer's paintings and learned how to use tone, shade and shadows to create form.

We have been learning about the Bible in Religion and have studied the stories of many of God's chosen people from the Old Testament. Here, we are learning acting out the story of Moses and the Ten Plagues.

For Black History Month, we learned about Dr John Alcindor, a physician and activist from Trinidad who settled in London. Dr John Alcindor became known as the "Black doctor of Paddington." Here are some examples of our research projects.

Today, we had a special workshop with Music Mission. Firstly, we had an introduction to playing the drums by exploring the drum kit itself and the different types of drum. After that, we explored the different types of rhythms used around the world, like the Samba and the ChaChaCha. Everyone got to join in with learning how to use your hands and feet on the drums as we finished off by performing some songs together.

During Autumn 1, we have been developing our throwing, catching, movement and agility skills through dodgeball in our weekly sessions. We really enjoy playing games as part of a team.

We went on a field trip to study how Hammersmith has developed as a settlement over time. This was part of our topic 'spatial sense'. In the classroom, we studied maps of Hammersmith from 1863, 1915, 1954 and today. We highlighted the changes we could see. Afterwards, we took a walk to the river Thames to observe these changes in real life. Finally, we created a field sketch of what we could see in the area.

We have been learning about how the artists Vermeer and Caravaggio used shade and tone in their paintings to create a 3D effect. We have enjoyed learning how to create form in our own artwork through sketching and painting various objects.

We enjoy using maths equipment to show how to add and subtract in many different ways!

We have loved studying the play Macbeth by William Shakespeare. The use of role play in our lessons has really helped us to understand the characters' thoughts, motives and intentions. Will Macbeth decide to murder King Duncan? Only time will tell...

Emotions On The Train - Clara, Noemi, Melissa and Diogo

Climb Aboard For A Ride - Francesca, Jean, Clementine and Jessica

In English, we are looking at the book 'Into the Forest' by Anthony Browne. Pupils had to write a persuasive note to the boy advising him on whether he should go through the forest or go the long way around. In preparation for their writing, we did a conscience alley where a pupil had to walk through the center, in role as the boy, and the people on the outside had to try and persuade 'the boy' on what he should do.

Pupils have been exploring songs by Elizabeth Cotten, blues and jazz music and train poetry. Today, we were fortunate enough to have professional songwriter, Miranda Cooper, provide a workshop for the year 3 pupils. Miranda was also accompanies by guitarist Nick. Over the coming weeks, pupils will continue to learn to play the ukulele , develop the skills they’ve learnt in music so far and their  to write and compose their very own song. Today pupils used the poems they wrote in English to write lyrics in small groups, with the support from professionals.

Miranda showing us how it's done, using our poems! 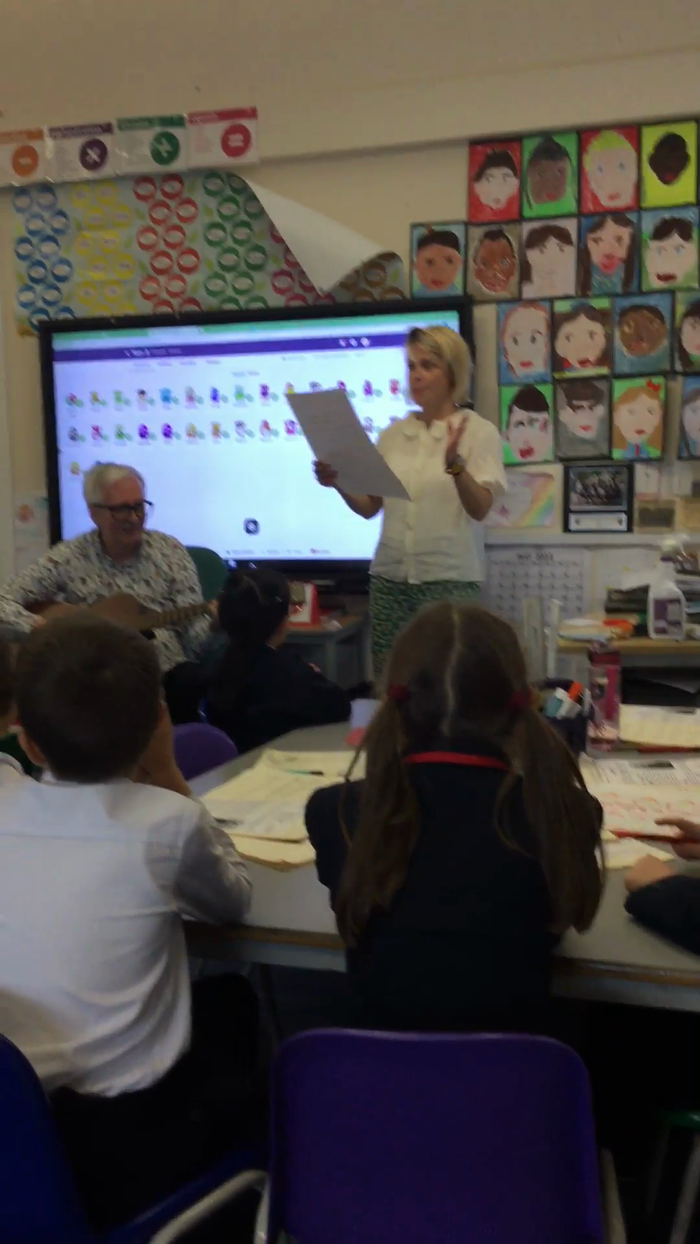 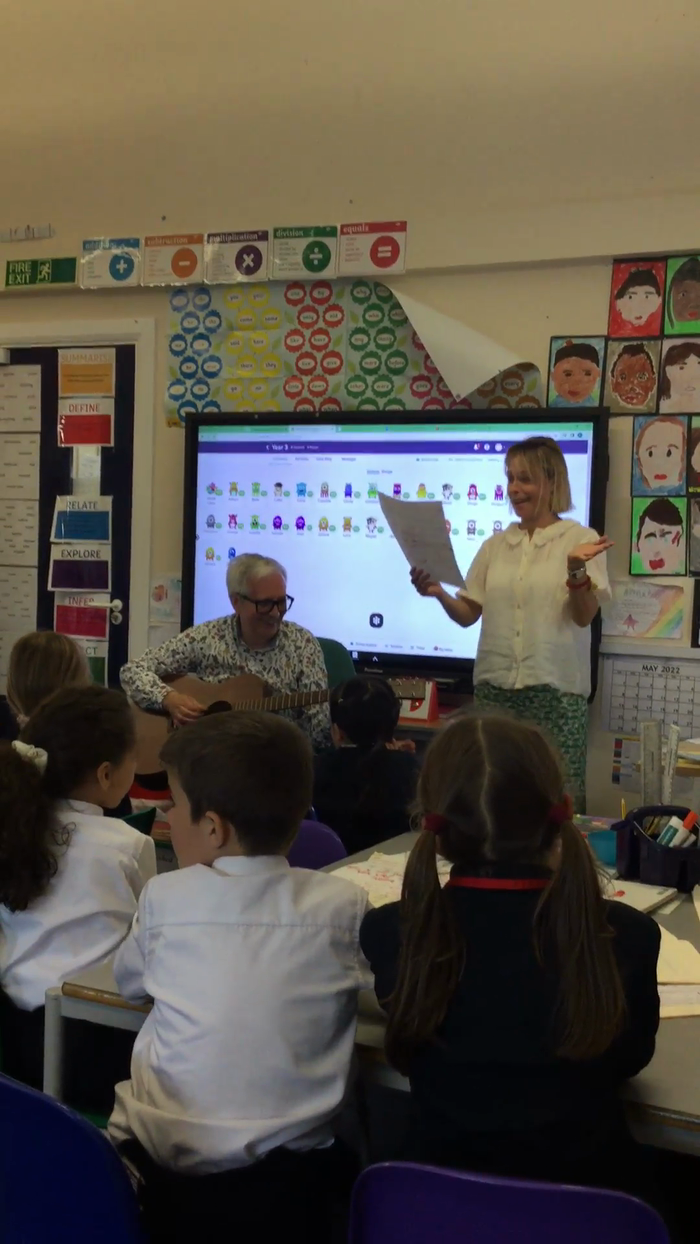 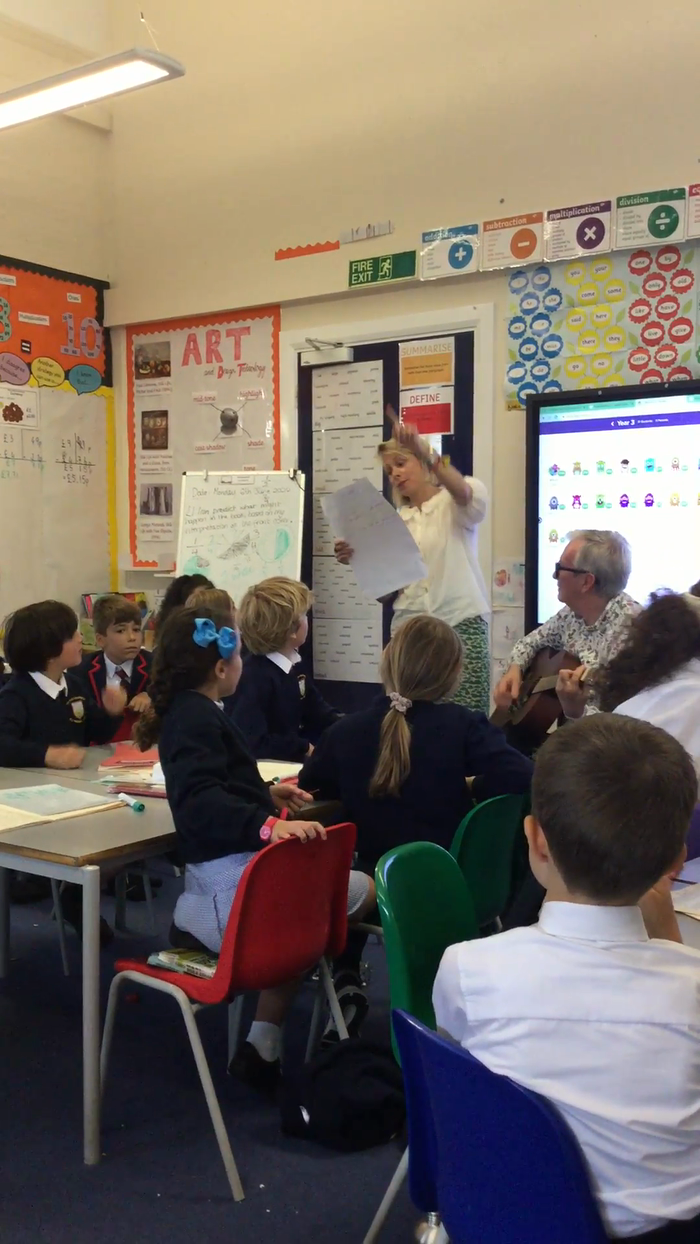 As part of our annual Laudato Si’ focus, in which Pope Francis calls upon ‘every person living on our planet’ to take environmental action to care for our ‘common home’, our class visited Gunnersbury Triangle, a wonderful nature reserve in the heart of our local area.  Gunnersbury Triangle is a green oasis created by intersecting railway lines, close to Chiswick Park Station, saved from development and managed for wildlife and people. The pupils carried out pond dipping using nets and trays to explore our aquatic habitats.  They also went mini beast hunting – looking in our woodland habitats to discover the small invertebrates that live within, and became plant detectives.

We also looked at climate change, in particular, diving into the Arctic Region. The Arctic is warming three times as fast as the global average. This is mainly because melting of snow and ice exposes a darker surface and increases the amount of solar energy absorbed in these areas (albedo effect). Pupils explored the effect this has on animal habitats and animal life in the region. Pupils completed a Now Press Play experience on Climate Change and also did their own research projects.

Learning to play the Ukulele

Year 3 are beginning to learn to play the ukulele in their music lessons with Miss Howard. This is going to compliment their English lessons where we have been focusing on the book “Libba” which is a story based on the life events of American folk and blues musician Elizabeth Cotten.

Well done to the year 3 and year 4 pupils taking part in the Skittleball competition at Sacred Heart Secondary School. Year 3 played a total of 6 games. They won 4 and lost 2 of their games. A massive well done to them all. They showed great sportsmanship and got better and better as the tournament progressed. Well done to the year 4 team who finished top of their group. They drew their first game and won the other 3. They then played against the winners of the other group where the game finished in a draw. Both teams did exceptionally well and were fantastic representatives for the Good Shepherd.

Visit to our Parish Church

Pupils in Year 3 created their very own pnuematic system. Linking back to last half term's science topic of forces, they explored various pnuematic systems and how they worked. They decided that they would make Charlotte's Web farm animals - linking to their Literacy text.

STATIONS OF THE CROSS

Saying Farewell to the Alleluia

Have a look at some of the Year 3 show and tells.

The pupils in year 3 worked extremely hard with Etain, our cookery teacher to host a Stone Age Feast for the year 3 parents. Pupils prepared the food, created art work and dressed up for the occasion. They made stone bread, oat cakes and much more.

We used Now Press Play to actively engage with our History topic, Ancient Egypt. Each of us wore a set of wireless headphones and we were sent on a journey to explore the topic. In the above lesson, we completed the Stone Age Experience. We followed the journey of a boy becoming a scribe for a dead Pharaoh and his journey to the afterlife. Afterwards, we created a story map of our experience.

Well done to everybody who completed an Ancient Egypt project over the half term. I was so impressed to see such a variety of projects and such creativity. It is wonderful to see such enthusiasm for learning throughout year 3.

We started using block code with the Sphero robots today. Using our block code experience with Scratch we managed to code the robots to drive in a perfect square and some of us even coded matrix animations!

Our Good Shepherd Junior Wildcats A and B teams took part in a borough football competition at Power League, South Africa Rd. Lots of other schools were there to play against.
Both of our teams had their moments: Our B team had a fantastic 2-0 win over Wendell Park during the group stages and our A team managed to reach the quarter-finals where they narrowly lost to St. Johns in extra time.

Mr Davis was very happy with the teamwork and positive attitude both teams showed throughout the tournament.

In the Autumn term, the department for Arts and Culture held a bake sale fundraiser to raise money to improve each classroom's reading corner. The pupils in Year 3 picked out three bean bags, a sea themed rug and a blue book case.

We created cave paintings in preparation for our Stone Age Feast.

Pupils carried out research to support their propaganda writing in English.

Our Power of Reading and Guided Reading text this term is Charlotte's Web. Today pupils worked in group to brainstorm reasons why Mr Zuckerman should not kill Wilbur. This is in preparation for writing a propaganda letter next week.

In Religion, we did a role play of the story of the Lost Sheep.

Today in science, we explored forces and magnets. We used magnets to investigate which items in our classroom will magnets repel or attract.

We really enjoyed our Stone Age drama workshop with One Day Creative. Throughout the day, we participated in various role-play activities, games and quizzes linked to our topic.

The viewing password is the same as usual. Please ask your teacher or the school office if you don't know it.

Club 144’s secret Christmas meeting- what were they up to?

We used Now Press Play to actively engage with The Stone Age – Iron Age topic in History and our book ’The Stone Age Boy’ in English. Each of us wore a set of wireless headphones and we were sent on a journey to explore the topic. In the above lesson, we completed the Stone Age Experience. We followed the day of a stone age boy and his family hunting.

The theme for this year's Anti-Bullying week is 'One Kind Word'. In today's circle time, we defined bullying and talked about what the emotional effects of bullying are on a person. We looked looked at different scenario cards and thought about which words we could use in that situation to make a person feel better! We then looked at some scenarios where people showed kindness and discussed the wider impact of showing kindness and respect in this way.

Over the week, we thought about how we can spread kindness using our words and continue this into our everyday lives in the future.

While black history is celebrated year round, Black History Month is marked annually. It recognises and values the inspirational individuals and events that have shaped the black generation. During Black History Month, we remember and celebrate the important people from the past and also those who contribute to and help our society today. As as class we learned about Claudia Jones. Claudia Jones was an equal rights activist and was the founder of Notting Hill Carnival. We decided to host our own carnival, by making our own drums and wearing outfits that were worn in Notting Hill Carnival itself.

About Our Church with Father Mark